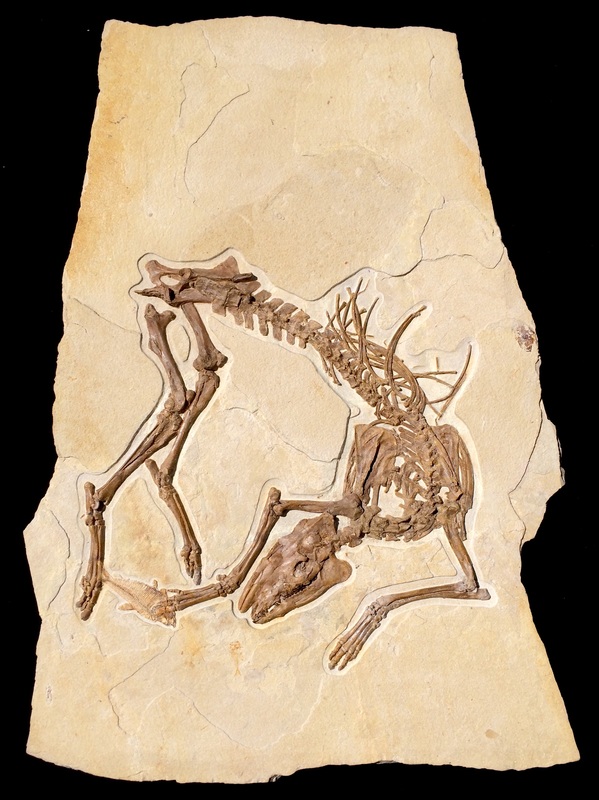 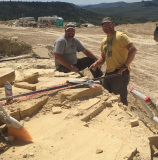 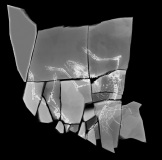 Fossil Shack is excited to be offering for sale on behalf of our affiliate, the one of the world’s most rare and complete fossil skeleton of one of the world’s oldest horses.  This is an amazingly complete skeleton with the only restoration being to the pelvis and upper femur bones.  The skull is 100% natural and in extremely beautiful condition.

This amazing fossil named “Olive” after the Oliver Brothers Mark and Mike who discovered it,is an extremely rare example of a Protorohippus venticolum fossil, dating back 52 million years from the Eocene period in Wyoming, and is one of only two complete examples of this fossil ever discovered. It is approximately two feet long and 12 inches tall at the shoulder; with an overall size of the fossil plate at about 30” x 28” x 4” thick and includes a single fossilized fish that is intricately contacting the skeleton.  . It was excavated from a fossil Lake quarry by Seth Sorensen of Fossil Shack, Brock Sisson of Fossilogic and one of our affiliates.

In early Spring of 2015, The Oliver Brothers and their family were digging in a fossil fish quarry near Kemmerer Wyoming when they came across a fossil that looked very unusual.  They called over their quarry neighbors, Seth and Brock from the Fossil Shack Quarry.  They looked at the fossil and immediately knew it was something special.  The bones that had been exposed had an astragalus (talus) bone, which during the Eocene was only present on a few limited species such as horses and camels.

After discussion with the Oliver brothers, it was decided that Seth and Brock should professionally remove the fossil.  Over the next several hours, the three painstakingly excavated the horse, finding small pieces, no more than a few millimeters across, which had already fallen down the hill.  Upon initial inspection, it was believed that the stones containing the bones held only a partial skeleton.  It was assumed that there was no skull and that the total of bones equaled only about 1/3 of a complete animal.

Once the stone was removed from the hillside, it was taken back and X-Rayed.  At this time it was discovered that the animal was amazingly complete, including the skull and all four feet.  It was only missing a small section of the pelvis.  The restoration was completed by Fossilogic, the world leader in fossil preparation.  This ended up being one of the most incredible discoveries to ever come out of the Green River formation.
​
The first name given to this species was Hyracotherium in 1841, given to a fragmented specimen discovery by Richard Owen.  Owen lacked many important parts of the skeleton with his find, and based mainly on the fossil teeth alone, named the animal Hyracotherium, which means “hyrax-like beast”. In 1876 Othniel Marsh found a much more complete specimen which he named Eohippus  meaning “dawn horse”. The two fossils were not connected for many years. When they were, and following standard scientific naming conventions, the earliest name became the accepted scientific name. Recently, many paleontologists have concluded that the genus  Hyracotherium needed to be parsed into separate genera…separating animals that preceded jungle ungulates like the rhinoceros, from those that were part of the horse evolutionary chain. This fantastic Horse is part of the latter group, and as a result, future scientific work on this animal will be classified against the name Protorohippus venticolum.

For more information on the Horse, or for details about purchasing it, contact Seth Sorensen at Seth@fossilshack.com